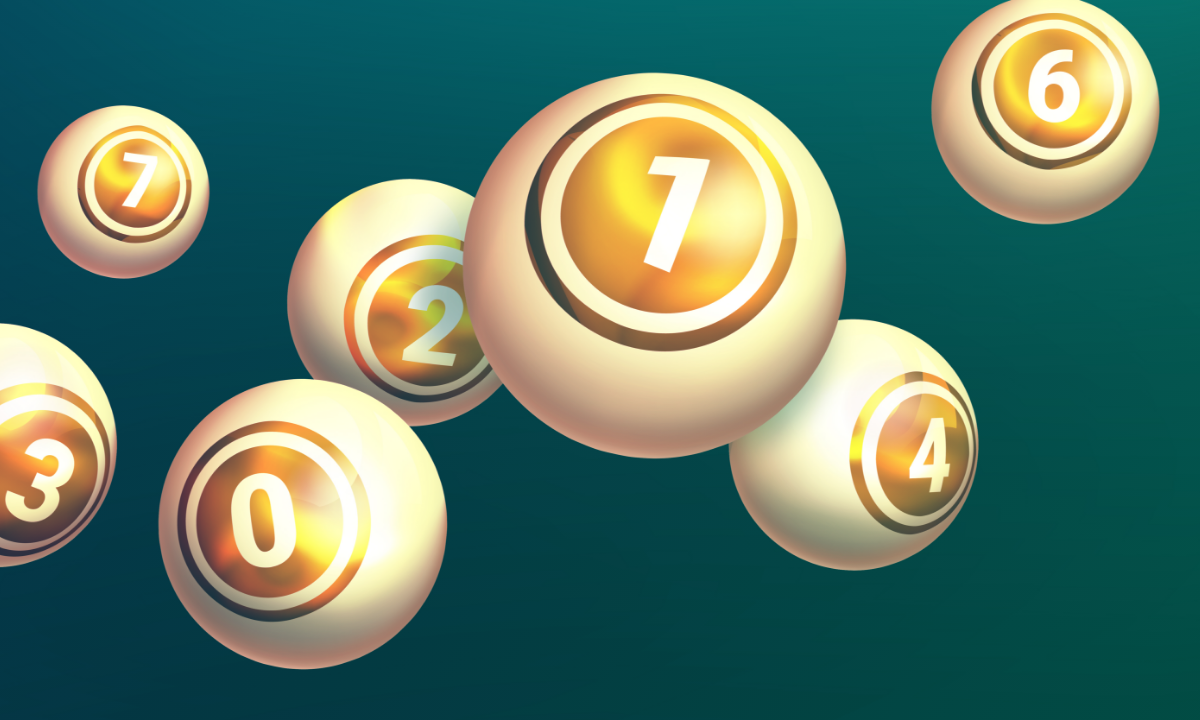 Most Common Keno Terms to Know When Playing Keno Online

So you want to learn about the common keno terms? Good, because if you ask us, keno games are totally underrated. Slots are always taking the front-row seat, leaving other casino games such as online keno in the dust.

Yes, keno is indeed a popular game in some parts of the world. In fact, it even helped build the Great Wall of China. But with all the excitement and the hefty keno payouts the game can offer, we feel that keno is ready to make a comeback.

And with that, let’s kick off the keno revival with a quick how-to guide on playing keno online, along with a few need-to-know keno terms so that you can learn the ins and outs of playing keno numbers and how to snatch those multiplier payouts in this lottery-style casino game.

How keno is played online

Keno is a very simple game to play and understand. Part of its appeal for most players is that you can place a small bet and possibly come out with a massive win. Keno works similarly to a lottery.

Most keno games allow you to pick between 10 and 20 lucky numbers. This, however, will depend on the specific keno games you play. Total numbers can range either from 1 to 40 or 1 to 80, as seen in Super Keno from KA Gaming on our menu. 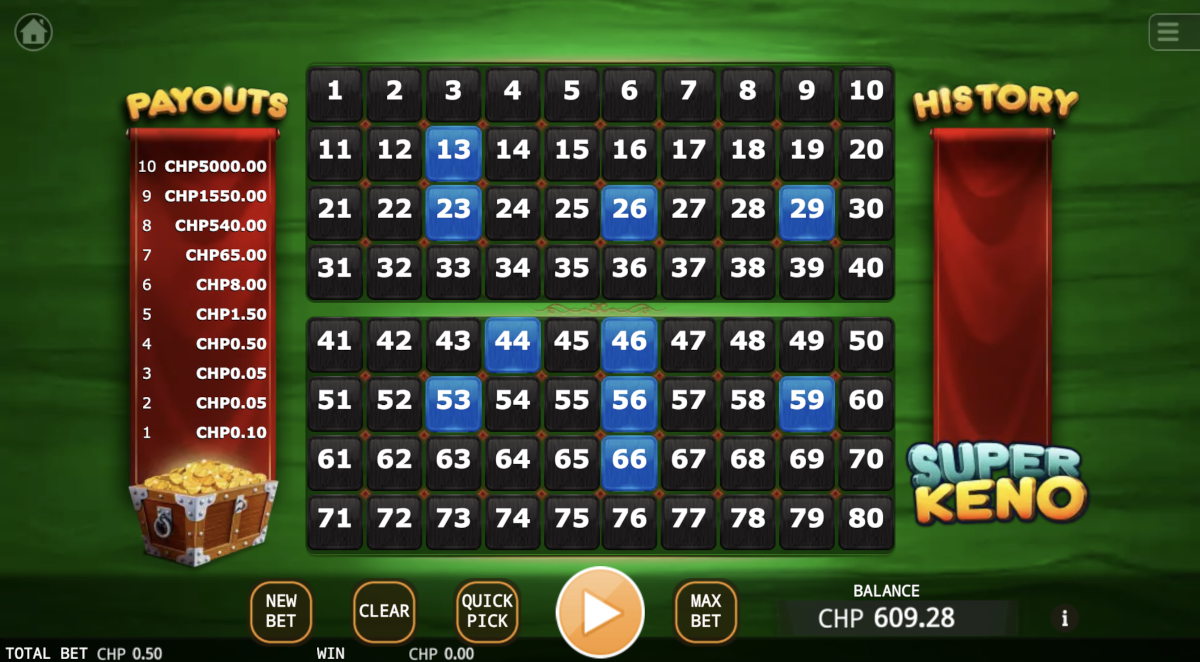 Once you’ve picked your keno numbers, clicking the Play button will see the game draw 20 random numbers from 80 available. Your keno payouts will be awarded according to the pay table. It’s important to remember that the more numbers you pick, the lower your payout multiplier becomes for landing a certain amount of keno winning numbers. 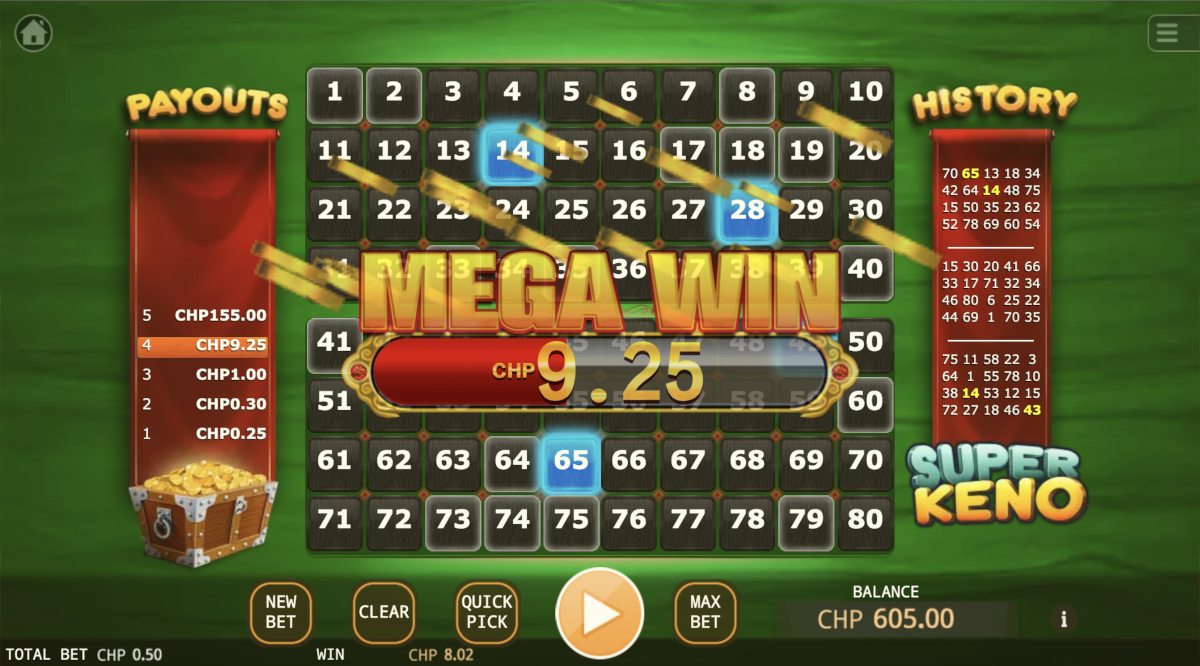 Before we move on to the common keno terms, it’s important to familiarize yourself with the keno pay table. This allows you to know exactly what your keno payouts are for landing a certain amount of winning numbers.

Plus, not all the best keno games have numbers ranging between 40 and 80 – some have even less. You’ll find many different variations of keno online, with some allowing you to pick fewer keno winning numbers or even offering less than 40 numbers in total, as seen in Keno from Spribe on our menu. 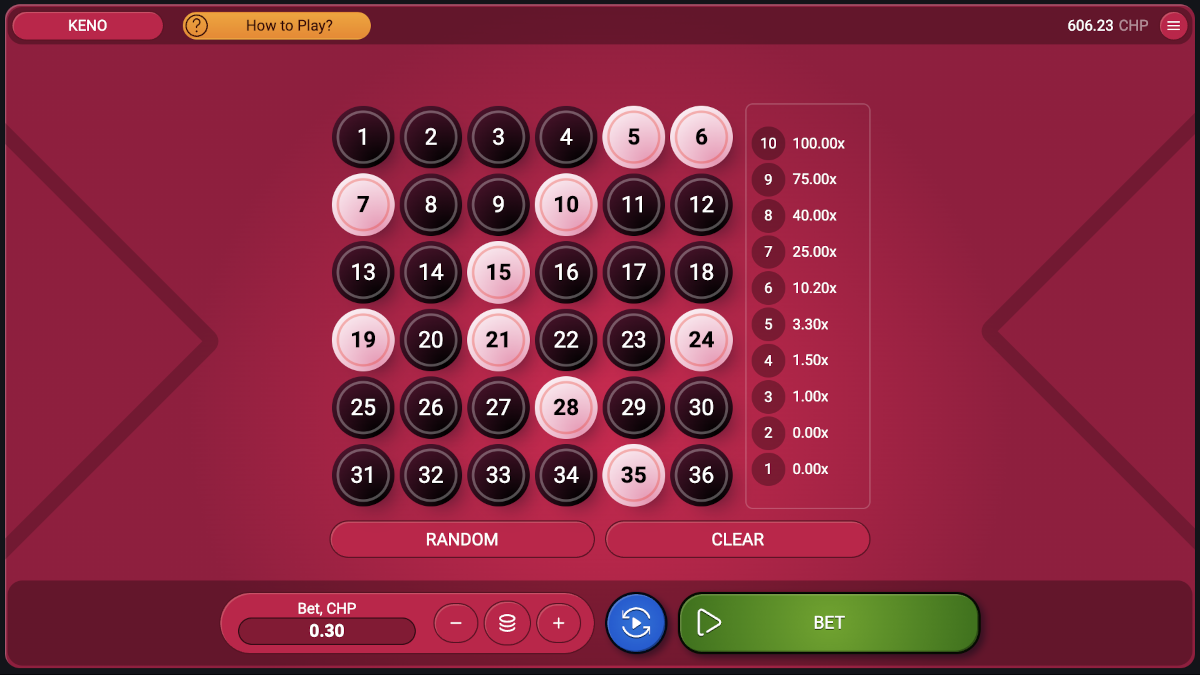 Before you brush up on your keno terms, let’s get the keno payouts out of the way. Keno odds and payouts can vary depending on the keno games you decide to play. As mentioned, the payout multiplier for landing a certain amount of keno winning numbers will decrease with every additional number chosen.

Let’s play Super Keno from KA Gaming at the minimum bet of $0.5 as an example. As you can see in the image below, picking 10 numbers will see you win your money back ($0.50) when landing 4 winning numbers. It also awards a payout of $1.50 for landing 5 numbers. 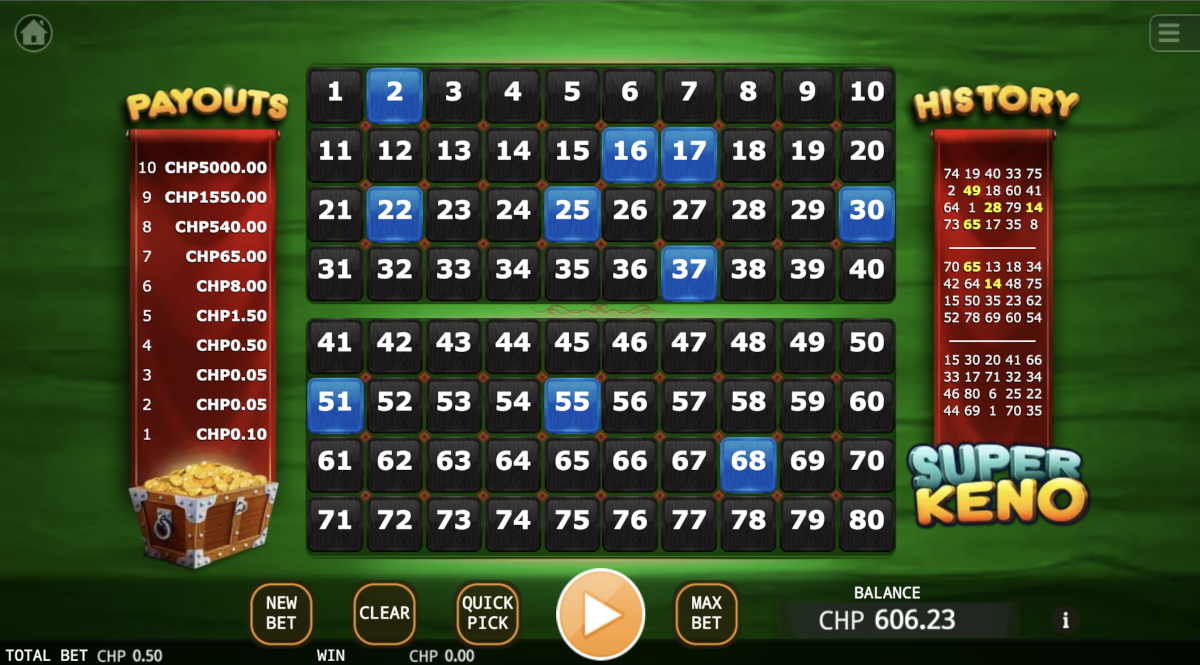 Picking the maximum amount of keno numbers as seen above does increase your chances of landing keno payouts. However, if we look at the image below showing only 5 keno numbers selected, you’ll notice that the pay table changes from what we saw when picking 10 numbers.

Here, landing 4 numbers will award a payout of $9.25. This is substantially higher than the $0.50 payout when choosing 10 numbers in total. And if you manage to land all 5 keno winning numbers, you’ll be scoring a whopping $155.00 payout. That’s 310x your total bet, by the way! 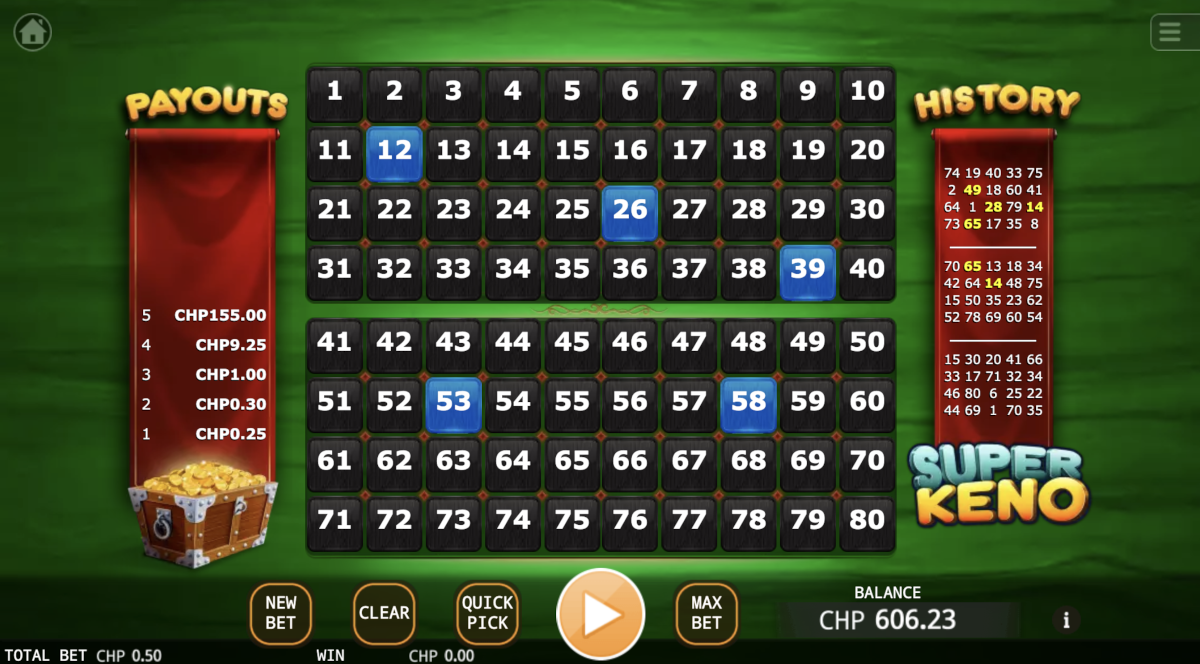 This is why it is important to study the pay table before betting on keno games online. You want to make sure you pick the keno games with the highest payout odds, as well as the right amount of numbers to secure a potentially big payout without risking too much.

Whether you’re playing keno online or in a betting house or land-based casino, some of the following keno terms may come in handy. Most of these are applicable to live keno when playing in a casino. However, knowing keno terminology makes the game much more fun and could potentially help you make the best of your keno experience. 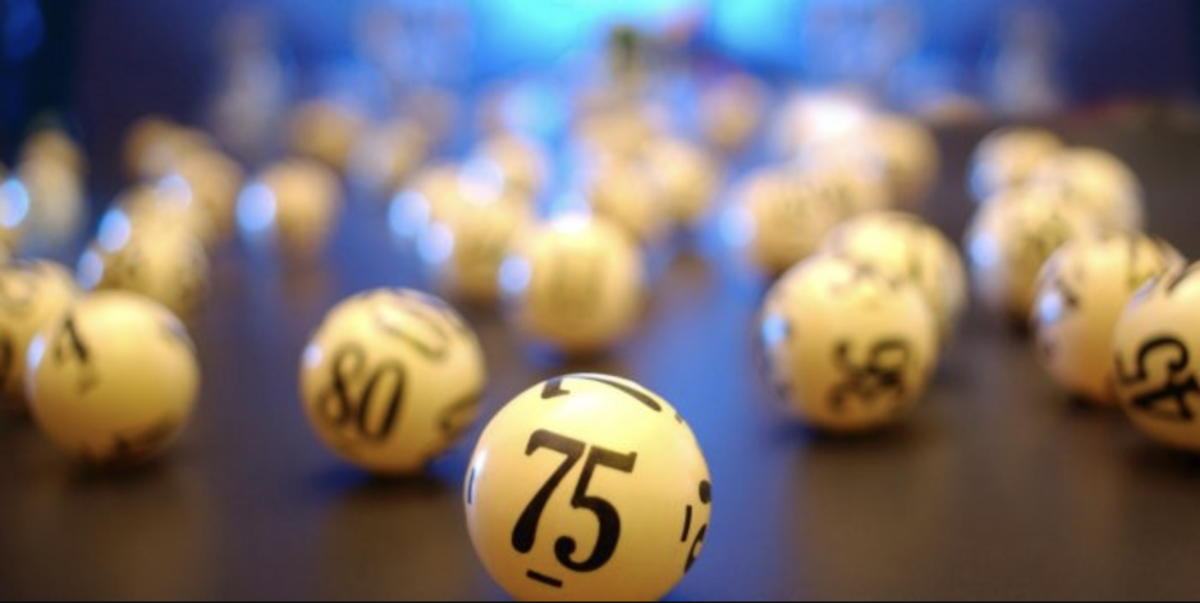 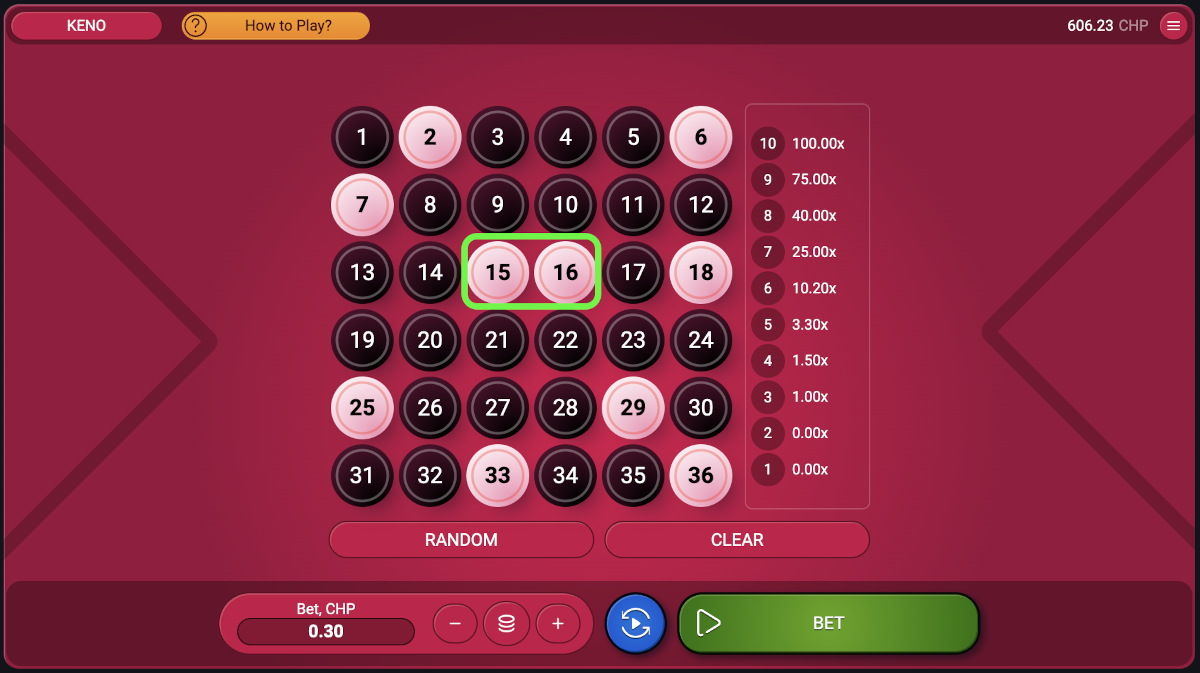 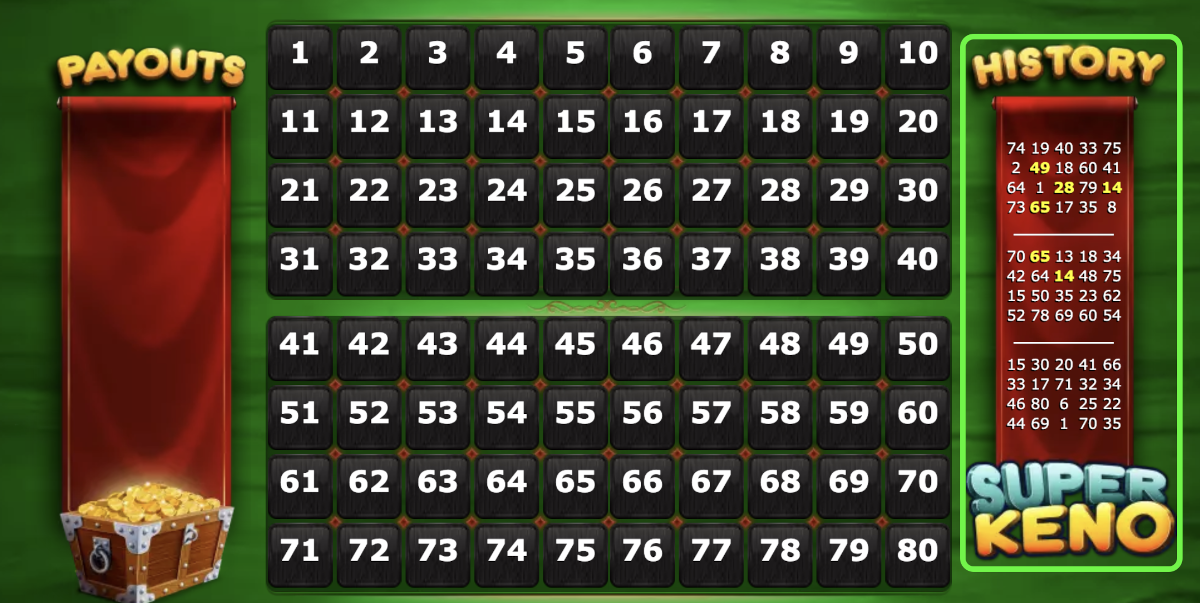 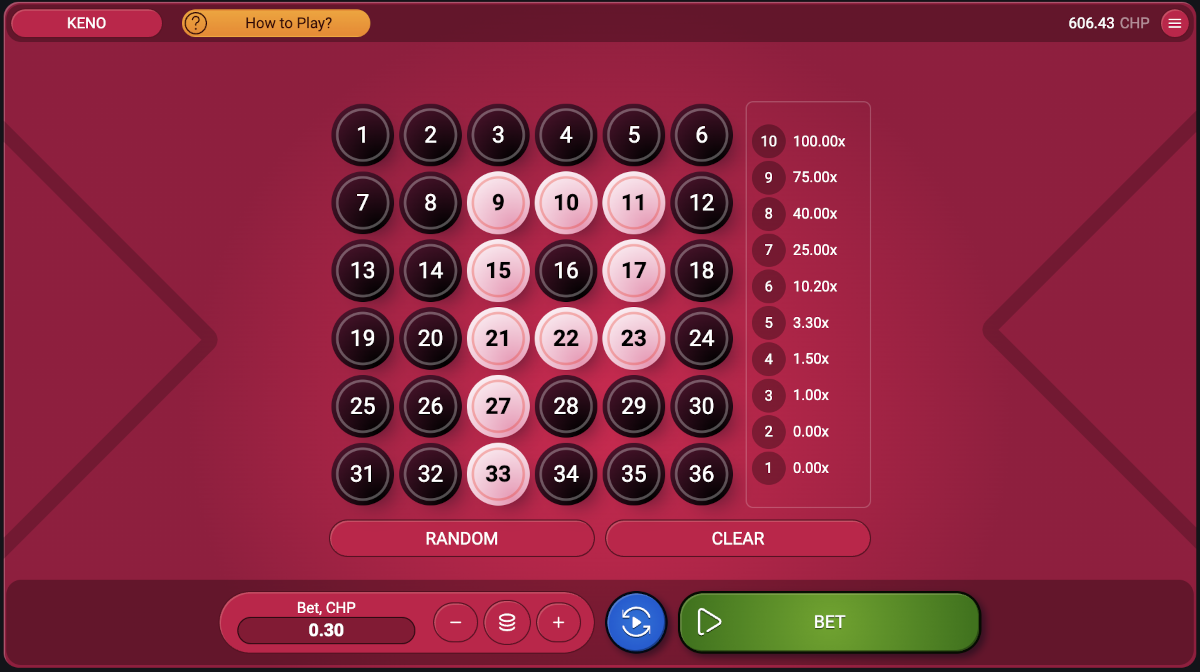 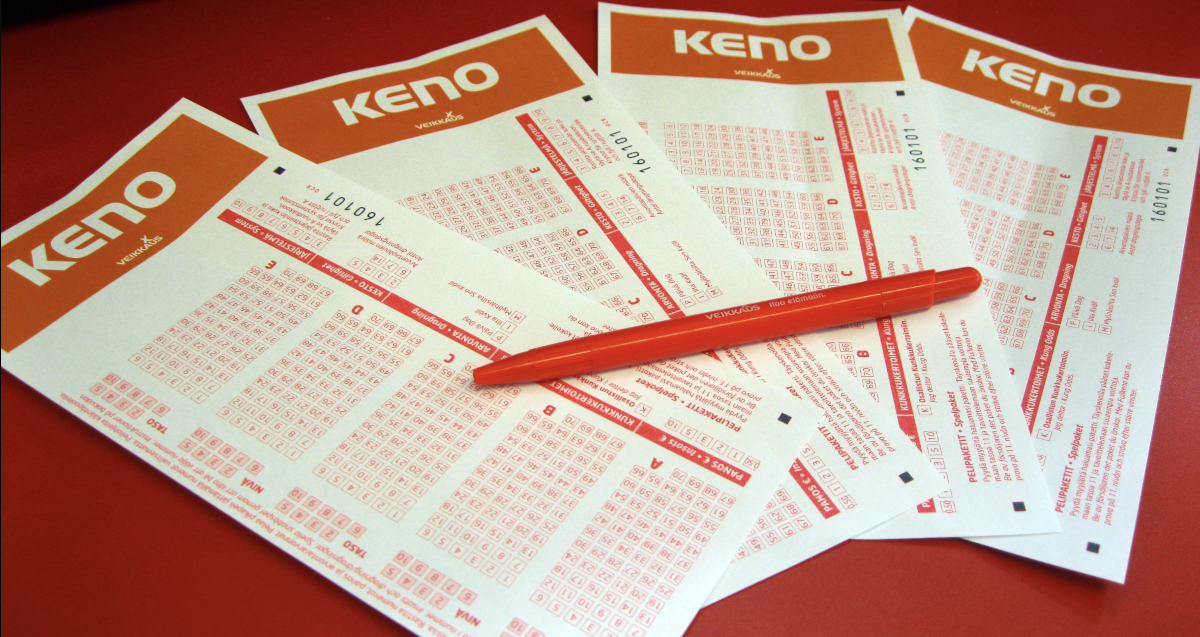 Now that you’ve brushed up on your keno terms and you’ve learned how to play, it’s time to hit ‘em up in our best keno online casino games at Punt. Don’t forget, most of our casino bonuses and promotions offering extra funds to play casino games work with keno games too. So don’t forget to snatch up our latest offers and kill it in keno at Punt Casino.

Looking for a new slot to try out? Punt Casino has four phenomenal suggestions for you to try right now.

Is Your Bluff Good Enough? How to Perfect Your Poker Face

How to Pull off Your Poker Face Like a Pro Is your bluff not tough enough?

Top Slots You Can Buy a Bonus On

Check out the top slots you can buy the bonus on at Punt to skip the hassle and get straight to the hussle today.

On the hunt for a big casino win? What about a massive payout on just one spin? Then you’re in luck – because the payouts come in hard and fast at Punt Casino!