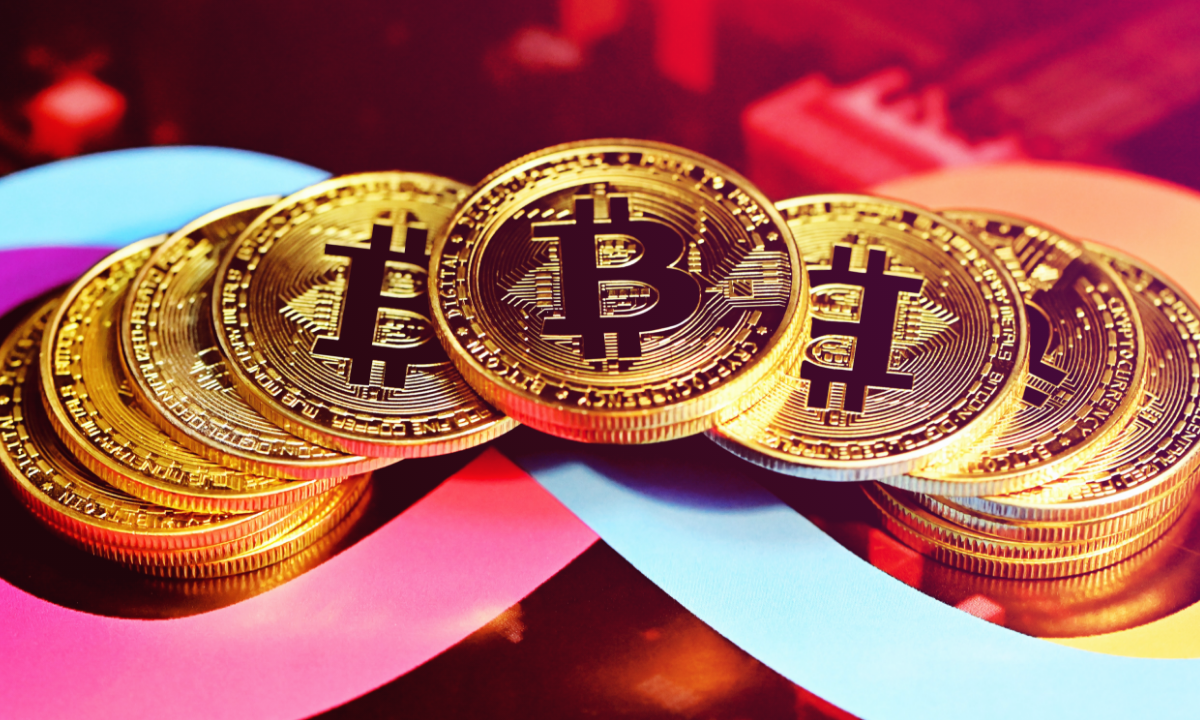 It’s Not Just the Crypto Markets That are Sweating

How many times have we heard that over the years? According to website 99Bitcoins, over 460 times, and yet every single one of those predictions has turned out to be false.

With the crypto market following other markets and taking on a distinctly bearish tone following a two-year bull market, those same predictions are coming out again, with critics, most notably those in the mainstream media, glorying in the collapse of Bitcoin and the crypto ecosystem.

11 years after one of the first Bitcoin-bashing blog posts was published, is there anything to suggest that this time, finally, the critics are right, or is it just wishful thinking and sour grapes from those who missed the boat? Let’s take a look.

Fundamentals Have Never Been Stronger

When it comes to the question of whether Bitcoin will recover or if the bubble has burst forever, we can look to history to guide us.

Bitcoin’s history is useful in one of two ways – from a fundamental/narrative sense it can tell us how far we have come and give us an idea of how in demand (or otherwise) it is, and from its technical history we can look for patterns that show us what we can expect from a bear market.

From a fundamental/narrative perspective, Bitcoin is in a vastly different place than it has been at any other point in history. The 2016-17 bull run was exclusively driven by retail investors, the everyday crypto boys and girls who wanted to know what all the fuss was about. Ever since then however, institutional interest in Bitcoin has only grown.

Tesla may have been headline-grabbing Bitcoin buyers, but there are dozens of private companies, hedge funds, and other institutions that have recognized the power and potential of Bitcoin and either bought in or made plans to.

The Wall Street Journal reported in mid-August that pension funds remained interested in Bitcoin as an asset despite the arrival of the bear market, two weeks after investment giant Blackrock tapped up Coinbase to offer Bitcoin to its raft of institutional clients. A Bitcoin ETF seems to be closer than ever before, while two nations now accept it as legal tender. All of a sudden Bitcoin has supporters in the U.S. Senate, and as a result Bitcoin and its brethren are starting to be discussed in positive ways in government circles, with clear signs that those in positions of power are finally starting to understand the benefits of Bitcoin and other cryptocurrencies.

We can also look at the amount of money being dedicated to Bitcoin mining, as the U.S. becomes its new home. Mining giants are plowing billions of dollars into Bitcoin mining infrastructure, bringing in lucrative new revenue streams for states like Texas.

Bitcoin mining is also driving technology behind the use of renewables, which makes up a growing proportion of Bitcoin mining annually.

The big question we have to ask ourselves then is ‘would this investment and adoption be taking place if there was a chance that Bitcoin was never going to recover’?

The next question we have to ask ourselves then is how and when will we know for sure whether Bitcoin is on the road to recovery or stuck on life support?

Fortunately, this is where Bitcoin’s price history, and the patterns it has formed throughout past bear markets, can help us.

Bitcoin has gone through three recognized bear markets in its lifetime:

As we can see, generally speaking Bitcoin bear markets are expanding in length, which is unsurprising given Bitcoin’s spectacular growth in the last decade. However, we can expect this growth to taper off and slow down at some point given that Bitcoin is now a half a trillion dollar asset.

To this end, we shouldn’t expect the current bear market to be extended by the same degree, although the current macro headwinds could drag it out longer than would normally have been expected.

Bitcoin bear markets have historically followed the same pattern – volatile price action as the floor is established, a period of boredom, a final flush, and a slow grind back up.

This pattern has historically also taken into consideration Bitcoin’s ‘halving’, a process that every four years reduces the amount of bitcoin that gets added to the supply by miners with each block they produce. Historically this has occurred towards the end of a bear market and has acted as a catalyst for the next bull market, with each of the last three halvings preceding a bull run.

With all this in mind then, when can we expect to find out if Bitcoin is dead or merely sleeping? If we assume that the bear market is split into three sections (the crash, the boredom, and the flush) we are already in the position to see when the first phase will likely end: 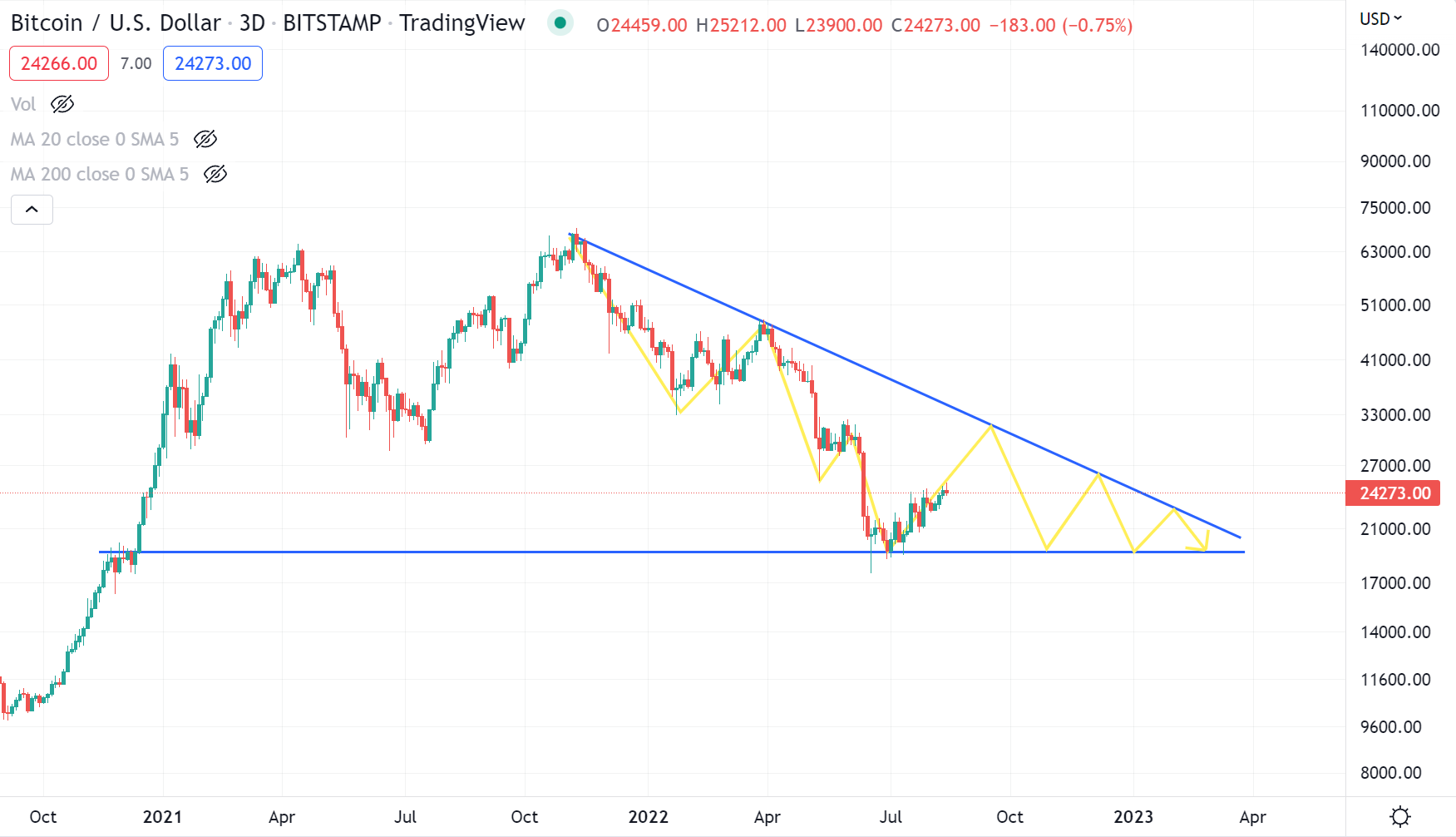 Should this scenario play out, as it has with other bear markets, then we can assume that phase one will be transitioning into phase two by the start of 2023. This would mark a typical year-long correction from the highs of November 2021.

Following on from this we can expect the boredom period to kick in. Of course we have no knowledge of how long this will last, but history tell us that a period of 6-12 months is typical, which would mean that 2023 will likely be the year that no one is paying attention to Bitcoin.

2024, with the halving due in May of that year, will probably be the year therefore that things finally start to pick up for Bitcoin, with a potential final flush taking place in late 2023 down to the key support level of $14,000.

Assuming then that Bitcoin bottoms out throughout 2023, if it isn’t in a better position by mid-2024 then we can assume that the naysayers have it right this time around and that Bitcoin is doomed, although this could be delayed if the world really has gone to hell in an inflationary handcart.

After Winter Comes the Spring

Overall then, we can say with a great degree of certainty that no, Bitcoin isn’t dead – it is merely going through the first stage of a three-part bear market cycle.

It has survived greater tests than the ones it is currently facing, and while it may not (yet) be the asset of choice for countering a recession, or worse an economic depression, it will wait in the shadows for the right time to bloom again.

Crypto winters are brutal, but with more people planting bulbs than ever before, the spring will be a thing to behold.

How to Explain Bitcoin to Your Family This Thanksgiving

Home for Thanksgiving this year? Then explaining Bitcoin to your family is the right thing to do, and here’s how.